History of Radiant Panel Heating
A short history on radiant heating. We've come a long way but it is still the most desirable form of heating.

A short history on radiant heating. We've come a long way but it is still the most desirable form of heating.

The first recorded use of radiant heating in buildings was by the ancient Romans who used it in their well-known bathhouses. These buildings were designed with chambers that allowed fires to be placed under the floors and within walls. The hot exhaust gases were routed through flue-like chambers, giving up their heat to the masonry surfaces along the way. Patrons were not only bathed in warm water, but the radiant heat from the warm walls and floors as well. As crude as these systems were by today's standards, they obviously offered comfort unattainable by simpler means. Their intricate construction testifies that comfort was highly valued, and justified the elaborate construction necessary to achieve it.

The first use of hydronic radiant floor heating using iron pipe was in England around 1907. In the years that followed, the English applied it in all types of buildings, including stores, schools, and hospitals.

Hydronic floor heating gained exposure in the US through the well-known designs of architect Frank Lloyd Wright, among others. Wright understood the need to provide superior comfort as part of the experience of living in a one-of-a-kind home. He used radiant heating to transform the massive stone and masonry surfaces typical of his designs into inviting elements, rather than the harsh cold surfaces they are often perceived as. Concerning radiant heating he wrote: "No heating was visible nor was it felt directly as such. It was really a matter not of heating at all, but an affair of climate." 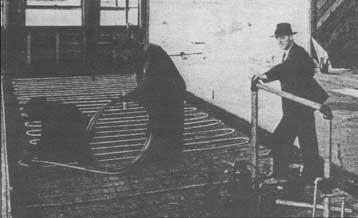 During the post-war housing boom of the late 1940's, thousand of hydronic floor heating systems were installed in the United States using copper tubing and steel pipe. Although some of these systems are still operating today, many failed due to metal fatigue or chemical incompatibilities with concrete. When a leak occurred, it was often difficult or impossible to find and correct. Eventually many of these early systems were simply abandoned in favor of other methods of heating. Skepticism understandably developed and interest in hydronic floor heating declined. The "death blow" to the first generation of hydronic floor heating was the advent of central air conditioning in the 1960's. Since a forced-air system could transport both heated air in winter and cooled air in summer, and didn't suffer from the potential leakage problems of early floor heating systems, it quickly became the standard of the American housing industry.

Rapid growth in the US home building industry over the last 40 years spawned a very competitive and price-dominated market for heating systems, a market that willingly substituted lower cost, and faster installation, for proven comfort. Many homebuyers were apathetic about the type of heat in their new house. Most just assumed their builder knew the best way to heat their house and accepted his choice without question. Unfortunately, many became "casualties" of an apathetic attitude toward comfort that accompanied the fast-track building ethic. Many would now be more discriminating about the method of heating used in any new home or addition they build.

A recent survey conducted by an independent consumer research firm found that 80% of the 80,000 American households responding were only somewhat or not at all satisfied with their heating system. Only 16% said that price was the most important factor in purchasing a new heating system. The message is clear: Most people want better comfort from their home's heating system, and most would willingly spend more money to achieve it.

Without a doubt, comfort has always been the most sought-after benefit of radiant panel heating. Even early hydronic radiant heating systems, though sometimes plagued by premature material failures, delivered superior comfort for their time. A way was needed to retain this comfort, while at the same time making hydronic floor heating easy to install, and capable of a long, trouble-free life.

During the 1960's, as American interest in floor heating was rapidly declining, research was underway in Europe on a new polymer material called cross-linked polyethylene, or "PEX" for short. Although originally developed as a sheathing for underwater cable, it would become the material that eventually revolutionized the hydronic floor heating market worldwide. Today's hydronic radiant panel heating systems are as different from their predecessors as compact disks are from phonograph records. Several kinds of high-tech piping materials now make it possible to install systems that can last for decades, perhaps even longer than the buildings they are a part of. These materials have been extensively tested in radiant panel heating applications over the last three decades. Each year, hundreds of millions of feet of tubing are installed in new radiant panel heating systems worldwide. Major advances have also been made in heat sources and controls. This state-of-the-art hardware has effectively merged the superior comfort aspects of radiant heating with market demands for easy installation and reliability.